Plain vs. Obfuscated, Simple vs. Complex 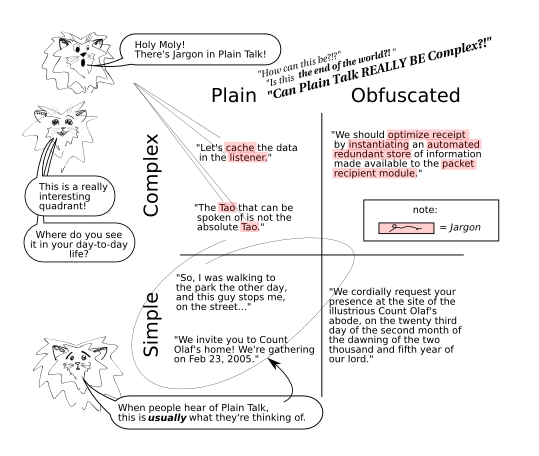 Perhaps these aren’t the best terms? Perhaps we can find better terms, for what we want to say?

The bottom-right quadrant, “Obfuscated Simple,” seems kind of fishy. It seems to focus mostly on class issues, to differentiate itself from the left side.

Is there a deeper connection here? Maybe yes, maybe no; We can talk about that.

But the main focus of this page is on the top-left quadrant: ComplexPlainTalk.

Complexity: In the words, or in the sentences.

PlainTalk jargon may be called “ShopTalk.” The phrase “Shop Talk” probably does not refer to obscure complex language.

Most people speak ComplexPlainTalk. This is by definition, actually.

Programmers talk about the various devices that they manipulate, and how to make systems work.

Weight lifters talk about all sorts of equipment, and how to manipulate it, and strategies for growing muscle.

Gossips talk about networks of people, holding in their heads lots of little details and arrangements.

Everybody speaks ComplexPlainTalk, and it can be difficult, if not impossible, for others to understand it.

This isn’t a free pass.

(Why so confrontational? Because people who want to speak in an obscured way (see: WhyPeopleAvoidPlainTalk??) use “the necessity of Jargon” as their ticket, as their excuse, to explain their way of talking.)

Just because jargon is used in different fields, it doesn’t mean that all complex talk is equal.

Among experts in a field, there are people who can say: “This is plainly spoken, this is needlessly obscurely spoken.”

To pass the test of ComplexPlainTalk, it is not enough to say, “This is jargon.”

To pass the test of ComplexPlainTalk, a disinterested expert needs to say, “this is spoken plainly, this is PlainTalk.”

The Ignorance of the Outsider

A speaker may say:

An outsider doesn’t know if this is ComplexPlainTalk or not.

The outsider may wonder:

However, an expert, on seeing the system and seeing the sentence, may be able to recognize:

The outsider is ignorant.

But that does not mean that the speaker is talking okay.

The expert is speaking ComplexPlainTalk. Not the speaker.

The point is to demonstrate that just because there is jargon, it doesn’t mean that it’s “okay.”

It is not a valid defence to say, “I require Jargon, and thus can’t speak PlainTalk.”

The expert can tell the difference.

Is the SVG source for this image available?