The “EcosystemOfNetworks model” refers to a model that was described in a paper. The paper is no longer available online but here's a related post.

It can be understood as a model / theory describing:

A critical diagram from the paper, containing several of it’s ideas: 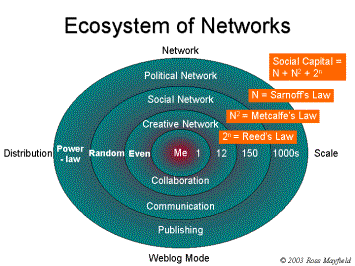 From Ecosystem of networks:

Here we review some expressions that people have cooked up to model the “value” of networks. These expressions take as input the variable n, which represents the number of people in the network.

These are ordered from the slowest-growing proposal to the fastest-growing one.

(more precisely, I believe that all of these laws are only “on the order of”; for example, Reed’s law is really that value = O(2^n); if this doesn’t mean anything to you, you can probably ignore it)

Sarnoff’s law simply assigns a certain value to each person in the network.

The Odlyzko-Tilly law follows if you assume that:

A more mundane justification for the Odlyzko-Tilly law is that n*log(n) is a function which happens to grow faster than n but slower than n^2 (faster than Sarnoff’s Law but slower than Metcalfe’s law). If you believe in Metcalfe’s “crossover point” argument (see below), then you need some function which grows faster than n. If you also believe that n^2 grows too fast, then you might want to try something which is greater than n but smaller than n^2. See also Briscoe, Odlyzko, and Tilly's paper.

Reed’s Law follows if you count up the number of distinct groups that could be formed out of the people in the network. For instance, if there are 4 people in the network, A,B,C, and D, then here are all of the possible groups: {}, {A}, {B}, {C}, {D}, {AB}, {AC}, {AD}, {BC}, {BD}, {CD}, {ABC}, {ACD}, {ABD}, {BCD}, {ABCD}. If you believe that each of those possibilities contributes a constant amount of value, then you get Reed’s Law. Also, even if you leave out the empty group and the full group and the groups with only one person in them, you get something close to Reed’s Law.

“The original point of [Metcalfe’s] law … was to establish the existence of a cost-value crossover point—critical mass—before which networks don’t pay. The trick is to get past that point, to establish critical mass.

…because the value of a network increased quadratically, it would quickly surpass its costs, which grew linearly.”

In other words: if you think that the cost of a network grows linearly with size, and you think that there is a “critical mass”, below which the network is unprofitable and above which is becomes profitable, then your network value model must be superlinear.

Some properties of the various network valuation models

How valuable is another connection? (the first derivative)

In Sarnoff’s law, the derivative of n is 1. So the increase in value that you get by connecting an additional person to the network is independent of network size. For example, if going from 2 to 3 people increases network value by $5, then going from 1999 to 2000 people will increase network value by another $5.

Good point. I think that Elgg is probably one of the best systems that exists right now, because it lets you show who you are connected to based on different interests and involvements. So, in a way they may be approaching this.

This inspired me to imagine PoliticalSoftware, noting that current SocialSoftware works (well) for the Social Network (150) level, or the Creative Network (12) level.

Political Software would account for the realities of vast political networks, and include groups as a basic entity, effectively encorporating them (corpos = body,) and give individuals (and perhaps corpos as well) voting rights.

The first sentence refers to a paper, but the link is to a blog post. Also, the diagram doesn’t seem to be in that blog post. Is there a link missing, or am I just not looking in the right place to see the diagram in its original context? Thanks

I guess that so far I favor the Odlyzko-Tilly law. Not because of that stuff with the Zipf distribution, but rather because of the “more mundane justification”; that is, if you buy into linear network costs, and the existence of a “critical mass” point of profitability, then you need a superlinear growth in network value. But Metcalfe’s Law seems to grow too fast; is the addition of the 2000th person really worth $4000, when the addition of the 4th person was only worth $7? So, I want something in the middle of Sarnoff and Metcalfe, and n*log(n) is one such formula.

I’m guessing that the Ecosystem of Networks paper is going to say that large networks (“political”) follow Sarnoff’s law, and small ones (“creative”) follow Reed’s law. I guess this could be modeled by a more complex formula which added together different components, where each component asymptotes (and therefore stops having an effect) once the network reaches a certain size. But such a formula would be less appealing than Odlyzko-Tilly, because it would have more free parameters (the parameters which control when each component asymptotes; that is, the parameters which essentially say at which size a network stop being “creative” and starts being “social”, and when it stop being “social” and starts being “political”; although the cutoffs would be soft, not hard).

P.S. It’s always possible that I may have made some mistake in the math…

The paper that RossMayfield wrote is no longer accessible online. I wrote to him and asked him what he preferred that I link to in reference to his work, and he equested that I link to http://radio.weblogs.com/0114726/2003/02/12.html#a284

So, this is the only standing publicly available reference material authored by RossMayfield on this subject, that I know of.

Awesome, I did not realize till just now that BayleShanks added significantly to this page! Thanks Bayle (if you are still following along here)!