I’m the co-founder of WikiTravel. I have some half-baked ideas about the Internet in general and wikis in particular. I’m a FreeSoftware advocate and an OpenContent fanatic. My motto: “There is no ‘I’ in ‘Wiki’.”

I tend to start pages from here when I don’t want to figure out where they should really go.

I drive a particularly beautiful and impractical car. 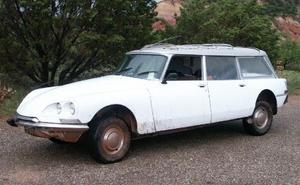 This is my lame attempt to describe myself in N3 format, just because I think N3 + wiki is interesting. Feel free to update or correct this!

I launched a new wiki on July 24th. It’s called Vinismo, and it’s a multilingual, CC-licensed, world-wide wine guide. We launched in English and French, but I hope to get Spanish, German, Chinese and Italian launched before the end of the year (so we have all of the top 10 wine-producing countries covered). Portuguese, Romanian, Russian, Hungarian, Greek, Ukrainian and Croatian would round out the top 20 (see http://vinismo.com/en/List_of_wine-producing_countries ).

I hope it’s going to be fun. I like drinking wine, and I’d love to have other people join in. It’s a really elitist, snobby field that could use some democratization.

I just posted an essay on paying wiki contributors on my personal site.

Myself, Evan, and MarkDilley were going to chat about this via Gizmo on Saturday. I would have to ask both Evan and MarkDilley, but I can guess that others from here would be welcome, too. I’ll also record the call and upload somewhere. Evan, MarkDilley, do you mind?

That said, I think I may be at BarCampBank Seattle, ..!

Waiting to hear back from Mark/Evan about time, will post here. If you miss it, Lion, will try to arrange another call about this some time next week. Would be cool to get lots of insights and ideas, criticisms, etc, from experienced wiki users.

Xtof has made a French translation of the Evan’s page http://socialsynergyweb.net/cgi-bin/wiki/XtofWiki/PayerLesContributeursWiki

Also, here are my initial notes about what I planned on talking with Mark and Evan about:

(I’ll eventually also migrate this into the OpenBusinessModels? wiki, once I have a better picture of a sustainable and workable model.)

Wikitravel was nominated for a Webby Award in the Travel category. I hope wiki people will take the time to vote for us in the People's Voice Awards.

I was embarrassed to see that Christophe had to get news about Wikitravel from Ross Mayfield’s blog, instead of from me. So I figured I’d make a late announcement about it here.

My wife Maj and I announced last week that WikiTravel and WorldSixtySix were both acquired by a company called Internet Brands, Inc. We’re going to be gradually integrating the two sites’ content and communities. On-site advertising will support our development and admin work, as well as hardware and other software dev.

We’re pretty excited about the events; Wikitravel and World66 have such similar goals that it’s been wasteful to be competing for so long. We also think that having a commercial company back up the projects will mean more stability and less sleepless nights for the two of us.

So far the Wikitravel community has been supportive, although a little trepidatious about what lies ahead. I for one am pretty happy that a company was willing to put money behind an Open Content, Open Source wiki community Web site. I’m not sure what this means for other wikis, but I’m glad ours is on more sure footing today.

Hé Evan, don’t be embarrassed. Bravo & Congratulations. Think that’s very good news for all of us and the credibility and legitimacy of our future public wiki-communities. I often mention Wikitravel as a very clever and focused project. SebPaquet talked me last week of a bilingual RecentChangesCamp session next year in Montréal. Hope I could find enough money to attend and have the pleasure to meet you and talk about this very kind form of wiki-business

I’m going to be on the road for the next two weeks, driving my very beautiful and impractical car around the circumference of the east-of-the-Mississippi part of North America. Folks in Toronto, Chicago, St. Louis, New Orleans, Florida, DC, NYC, or the APs should send me a mail and we can do some impromptu meetuping.

Wikitravel was featured in an article on BBC Online about DIY travel guides. We got seriously flooded with new users and lots of fresh info.

A case study written by myself and Maj about Wikitravel appeared in CMFocus magazine.

Also, I found this Agora wiki about MUDs and MMPORGs and stuff. I think there’s probably an overlap with CommunityWiki – I don’t see it referenced here or on MeatBall anywhere. Probably ripe for some community cross-talk!

Wikitravel is in the New York Times. Hooray for us!

So, I’m realizing that my page here is starting to look bloggy, so I might as well add some dates while I’m at it.

Also: after being on Orkut for a couple of days, I just don’t see why noone’s set up a SocialNetworkWiki?. Seems pretty easy to do! --EvanProdromou

I’d really love to have some comment, feedback, and suggestions on Wikitravel’s description of WikiWiki for first-timers. It’s intended to get people up-to-speed quickly, allay the standard fears about SoftSecurity, etc. Plunge forward and make corrections directly to this DocumentMode page, or if you don’t want, use the talk page, please. --EvanProdromou

On a similar note, we’ve got a new page on how to handle unwanted edits on Wikitravel, too. I’d also love comments, criticism, and of course corrections. --EvanProdromou

I read it and loved it. – AlexSchroeder

Heh. So, my discussion about UseRealNames on that page was (wisely) elided. But then it got moved to MeatBall:UseRealNamesDiscussion, where now a rather one-sided conversation is going on about it.

I don’t feel comfortable, after exercising my RightToLeave, hopping in to make a lot of trouble about UseRealNames on MeatBall. But it’s also weird to see someone addressing me and asking me questions when I’m not going to respond.

I wasn’t aware how interchangeable pages on CommunityWiki and MeatBall are. It’s funny slipping into another community – especially one with different BehavioralNorms – when you didn’t expect it.

A strange exploration of the WikiNow, I guess. --EvanProdromou

Hm, maybe my suggestion wasn’t that good. It just felt weird to discuss the Meatball policy on this wiki. We can discuss the merits of using real names in general here as well, of course. I just hope there isn’t much to discuss.

I think we were all mixed up, then. I was commenting on CW policy, not about Meatball. --EvanProdromou

I agree that we shouldn’t discuss Meatball policy for UseRealNames on this wiki. However, I do think that we need to address UseRealNames.

I’d like to see this page do these things:

So, we should reflect that in our UseRealNames page.

Weird! I was just in the process of revising the UseRealNames page as you wrote this. Please take a look and see if I did a good job at it. --EvanProdromou

“I think tailoring the CC licenses to the needs of bloggers who are ignorant and sloppy about copyright is probably not the best direction to go”.

At least you remembers the #1 lesson from meatball: blogging is sadness!

:With apologies to Wordsworth: “We bloggers in our youth begin in gladness/thereof in the end comes despondency and madness.” --EvanProdromou

Evan, the pic must be on the first line of the homepage to use it with [ new:: ]

Actually I don’t think so… The first occurence of “portrait:URL” is used, I think.

Hi Evan. I have just red your SuperordinateGoal that I could translate later when I will find a good french wikiword to translate ordinate ?

. Just a question, would you be interested to include WikiTravel in the WikiSchool project ?

I have to admit I haven’t taken a look at the WikiSchool project, but I will right now, and let you know! I should probably point out, though, that I don’t have much authority to make unilateral decisions about Wikitravel.

The AuthorshipModel page is excellent!

Thanks Alex. This Evan’s contribution could be translated soon in ModèleAttributionAuteur. Evan, just wanted to thank you for making me discover the Gaim JabberClient? in French via FreeCultureDotOrg?. Could be an opportunity to log on InternetRelayChat

Will have to check soon the french pages on WikiTravel I presented last tuesday in WikiSchoolParis?

Has it wireless or satelite internet connection onboard? It looks like

. May you not need a screwdriver even once on you whole trip. Have fun. --MattisManzel

Hey Evan. I just woke up to the fact that you’re in Montreal. I think you would be interested in the IleSansFil community wireless project - they are looking to implement some kind of geoannotation engine that uses the hotspot info. Here’s a relevant deep link: http://isf.waglo.com/pipermail/volunteers_isf.waglo.com/2004-May/000246.html

Let me know when you create IsGayWiki?. I think it’s destined for great things… – MartinHarper

Ah. Well, I think you may like Friends of gays should not be allowed to edit articles, on meta, including my favorite edit ever.

It’s so good to see you here again, after so long! Wonderful!

Great! WikiTravel is an awesome site.

Wow, didn’t realize you were one of the people behind identi.ca