This page was inspired by SocialConstructionOfScience. It focuses on a model of how scientific controversy is resolved, and the relationships between the ivory tower and the general public. We wanted something that was written in PlainTalk, and that described the main ideas at work. 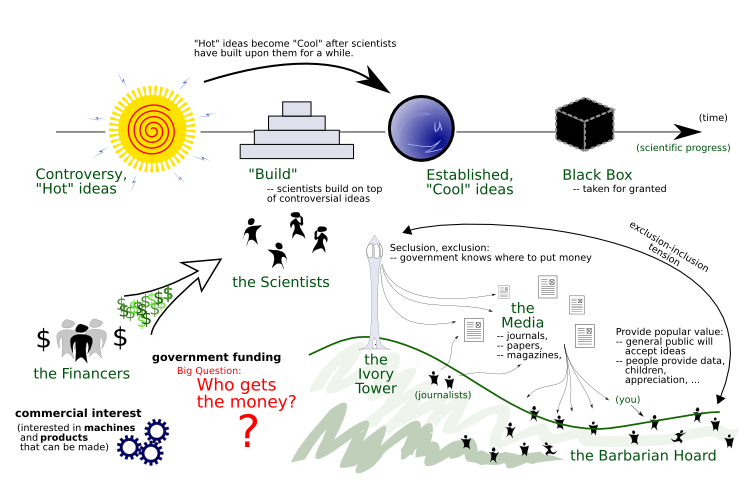 This is basically part 1 of the story. It's about how scientific controversies are settled.

For part 2, we zoom in on that part where hot ideas are first starting to be built upon.

This is a story of scientists, funders, and credentials.

For part 3, we move to focus on the Ivory Tower.

This is a story about scientists, the public, and some journalists as well.

xorAxAx and I struggled with this sentence:

:"Since most observers are within the social network of their society, from their point of view, the society-wide fact appears as a natural fact. Observers outside this network will appear different or strange, and often denigrated as being illogical or even "primitive" by social Darwinists such as McLuhan?."

(Hmm, looks like for a generation of geeks, "ivory tower" will mostly remind of an artifact that costs 1 to cast and that's useful in millstone decks)

Um, shouldn't it be "the Barbarian Horde" and not "Hoard" in the SocialConstructionOfScienceImage ?

Well, to be honest, it's just an outline right now.

The more I think about it, the more I realize that this is 2 or 3 stories, rolled into just this one section of the page. I'd like to expand them out a bit, and perhaps segregate the pictures.

I was trying to save space. But if I cut this into three articles, then I can have just 1 picture fot that, and I think that would be pretty cool. (I'm personally interested in the subject.)

The second story is about how funding works, how you develop the need for a public display of segregation and credibility, and the ways that scientists show that they are more worthy of funding than other scientists (and the public in general.) This has tie-ins with my PlainTalk theory, and why people speak in obfuscated language.

The third story is about interactions between popular media and science. (MediaOnResearch.)

The most interesting parts to me are (1) and (2). I think the sort of reasoning happening there is comparable to things that happen in the software world. For example, the way that scientists kick the tires of their theories, is comparable (not the same, but comparable) to the way developers kick the tires of their platforms. Once a developer adopts a platform, the developer has an interest in defending the platform. Just like Latour talks about with the scientific theory.

There is a struggle right now between proprietary and Open Source software. I believe that the same thing will play out soon between Open Knowledge and proprietary / locked-in-college knowledge as well. We'll see how things go.