Spokes - Where people tend to connect inwards towards a center point.

Circles - Where people tend to connect into circles of connection. 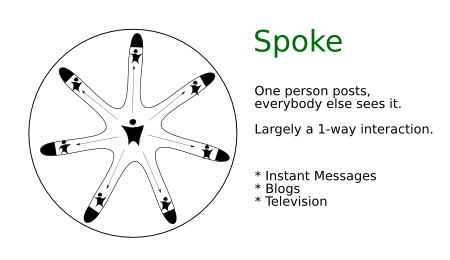 The readers do not see each other, and they do not communicate with each other. Rather, they just read what comes from the center. Maybe they email the person in the center as well, or whatever. But the studies are showing that you have this sort of spoke shape pattern.

A wiki, on the other hand, is sort of circle shaped. If you post to the wiki, everyone sees it. YouWillBeHeard. 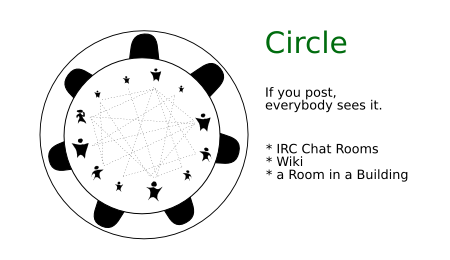 Say you wanted to have a circle shape in blogs. Then everyone talking would have to agree to listen to everyone else. They'd all have to subscribe to each other.

They do this, actually, in particular groups.

However, it's very costly to join such a group. You have to get noticed and then build relationships with each member of the group.

Whereas, in a wiki, you just start talking. Suddenly, everyone's looking your way.

Mediums that are spoke shaped:

Mediums that are circle shaped:

Mediums that are shaped in other ways:

In the PowerLaw language of "Diversity+Choice=Inequality," this is a situation where a miniscule yielding of Choice yields greatly less Inequality.

That is, when someone enters a wiki and sets down a post, everyone in the wiki is forced to acknowledge it. Even if someone deletes what was written, unless the reason given was "spam" from a trusted person, everyone in the circle tends to look.

There are gating factors to Circles, like PointsOfUnity. And you have to deal with things like disagreements. (IntegrationAndIdentity.)

But I think most people would agree that the system is much "fairer," or at least feels that way.

Of course, all of these mediums could be used in ways other than is natural to them.

Everyone in a room in a building could wear blinders and ear muffs, so that they see only one person, and thus end up with spoke shaped interactions.

Or the soundman could simply crank the volume up to 10, so that the band on-stage drowns out everyone else.

Or a group could teleconference over Television.

I am talking in the general, normal sense of these terms. What the usual "SocialAffordance" of the things defined suggest. The uses that these technologies tend to bring about.

It should be noted that this isn't a circle in the sense that the "network topology" is a circle. In a circle, points are connected only to (two) adjacent points; in this stucture, you might say everybody is connected to everyone (a "clique", technically). Or, you might say that it is in fact a hub and spoke topology, with the medium (the wiki, for example) in the center and the participants as the spokes.

The difference is that the medium is in the center of the spokes, rather than a head honcho.

But you could visualize it as people sitting in a circle, and periodically someone steps into the middle of the circle in order to speak. So the word "circle" makes some sense, it's just that it's not the network topology.

Similar too? EndToEnd, PeerToPeer, Bottleneck … Maybe that's the same as the general issue about what the topology of the social network is.

This is also similar to the coordination problem. I.e. how do you coordinate the flow of edits to the shared assets fo the community. Turn taking, locks, optimistic concurrency?

I was excited to learn that lock-free, wait-free coordination is possible. Synchronization Strategies

I had a hard time updating this page, because my mind kept pointing out flaws:

I think this page can be boiled down.

Boiled down to what?

I believe this is an instance of too many ideas in one abstraction.

Taking it apart, I believe we find two major things: