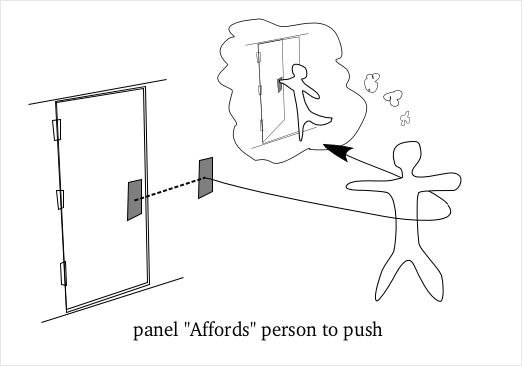 “Affordance” is a term used by perceptual psychologists. Affordance is what an object suggests to us. For example, if you see a bench, you might think to sit down on it, or to lie down on it. Some doors have a panel on once side, and a handle on the other. If you see the panel, you think to push it. If you see the handle, you think to pull it. Perceptual psychologists use the phrase “object affordance” to talk about how objects make us think to use them.

Perceptual psychologists ask, “What is it about this object that makes people want to use it this way?” The object must talk to us with some sort of language. If we can understand this language, then we can make tools that tell us how to use them! We can also make tools that recommend some uses, and discourage others.

“Discouraging” sounds sort of odd: Why would a tool let people do something, but then discourage people from doing so?

One reason might be “because we can’t do anything about it!” You can throw just about any physical object, even if you don’t intend people to.

Another reason might be “because some people will actually need to use it that way.” If you have a fire alarm, you want people to be able to pull it. But you only want them to pull it if there’s an actual emergency.

Here is a concept hierarchy of affordance

I originally started by modifying WikiAffordances, but eventually decided to just give it it’s own page.

Correct me if I’ve misunderstood the idea!

Maybe I should submit to Wikipedia…

An example, by the way: the Apple LCD iMac has inch-thick transparent plastic around the screen. It serves no purpose except to afford moving the screen. Apple found nobody wanted to touch the shiny white edge to move the screen, but when the plastic was added, everyone started moving the screen to suit them - without it being suggested.

Perhaps this can be worked in?

The other broader idea, sort of ‘under’ WhatIsAffordance and ‘above’ WikiAffordances is the concept of SocialAffordance. That would flesh out the link of the concept well.

Now- I was going to post that on OpenMeatball?, because I thought that CW is for.. like… things relating to technology, and maybe wiki specifically. So I’m confused. (Where should it go?)

I have some links gathered, but need to write it up! I’ll post a sketch of it anyhow.

An afforance is the end product of a process. That process is one of the accretion of characteristics or knowledge that increases the fitness for use. It’s much like the way direct mail is done. The direct mail piece evolves toward increasing fitness to its purpose. This is the same process that Stewart Brand talks about in his book “How Building Learn.”

Note that the knowledge that is being accreted is implicit, so trying to describe an affordance itself is off the mark. We can only describe the explicit.

Can you explain that in more PlainTalk? I’m having a hard time following it.

Are you talking about the way something becomes after people have perfected it? After they’ve figured out how to make it work well for themselves?

A problem with “affordance” is that it is very much a language. As such, it can misconstrued, and relies on CommonContext, and all sorts of stuff. Where some people may think that something affords one thing, others may see no affordance at all, and still others may think that it affords quite the opposite..!

This may have something to do with how computer UserInterface is a learned thing. People who learn the language have an easy time adapting to new programs. After all, the new programs just speak the same language that all the others do.

But people who haven’t learned the language can’t pick up on the affordances. It’s all gibberish to them.

A text box “affords” copy & paste to you and I, and being able to move in and out from other documents. But it doesn’t do the same thing to the untrained person, who may well wonder, “How can I tell my friend about this thing in an email?”

Anywhere you and I see a text box, we think, “Oh Goody! I can put things in here, and take them out.”

This is language, and we should think of it as such, I believe. I think it has all the qualities of a language. The thing is that only machines can speak it to humans, bascially. Something of a one sided language.

I mean, think about a printed word. I see so much similarity.

Does the word “CAT”, written out, force you into thinking about a four legged creature that meows? Or do you retain all free will, and you are free to construct whatever meaning into the letters that you want?

If someone says something intelligable, are they exerting some mind control ray, forcing you to think thoughts? Or can you tune them out, or leave, or whatever?

On the flip side, can you, yourself, choose to make everything you hear completely unintelligable? Can you just flip a switch one morning, and suddenly everything people says to you becomes jibberish, until you flip the switch back the other way, and suddenly they are talking sense again?

How does affordance relate to the ‘Genre’ analysis from http://www.pliant.org/personal/Tom_Erickson/VC_as_Genre.html? He gives very good examples of how interface leads participants to a defined way of interacting. It uses as an example a internet forum (discussion board) and observes that displaying all messages in a thread on one screen gives newcomers a clue on the expected length of a message and frequency of posting.

I feel that we need ‘transaction costs’ to be added to the definition of affordance here. In sofware interfaces there can be several ways to do something, they differ not only on the ‘suggestive’ side, but also each can have different number of steps or different difficulty of steps.

Many good points, but he does not really analyze what could be done digitally and what is only an accidental features of current digital authoring systems. For sure there are some physical characteristics that cannot be imitated digitally, but with a carefull thinking you can imitate much more than is currently done - just no one tried.

For instance the tabs in my browser have much of the utility they describe as the unique characteristic of physical document files (on the desk).

I find this quote a bit disturbing:

It is only if paper’s usefulness is in the information written directly on it that it must be stored. If its usefulness lies in the promotion of ongoing creative thinking, then, once that thinking is finished, the paper becomes superfluous. The solution to our paper problem, they write, is not to use less paper but to keep less paper. Why bother filing at all?

Yes, it may seem wasteful to fill up paper with squiggles and then immediately throw them away.

Just as it may seem wasteful for fresh water to flow into the fountains of Rome, 24 hours a day, non-stop.

But it is actually better than the alternatives.

For PlainTalk with people, I’ve figured out that the word “invites” is frequently good language, for describing this idea.

We can talk about “object invitations.”

Not to knock “affordance,” which I can understand as a technical code point, for ultimate precision.

When you see the panel on the door (like on the picture above) you see that it was added on purpose - so you know that you should do something with it - you see that it’s phisical qualities provide only limited possibilities for action - you can touch it, you can scratch it or you can push it, by eliminating them you can deduce the right one.

I have recently stumbled upon an interesting book, titled Grounding Cognition. It’s a collection of several papers, all of which connect the human perception and thinking with his body and how it is build. One of the papers actually proposes that we store the mental images of artifacts (objects small enough to manipulate, as opposed to, for example, buildings or trees) as sets affordances and micro-affordances. This also is reflected in our language and thinking: a “table” is not necessarily the piece of furiniture with well defined looks and all: anything that affords the same things as a table can be called a table – even when it’s just a large rock, package, or a toy in a doll house (being “used” as a table by the dolls). The more the affordances of the object are similar to those of all the tables we remember, the more table-like it seems.

It’s not just that the panel on the door “invites” pushing, it’s that the door is able to be opened that way, and that’s the best way to open it. (Don Norman has plenty of example of panels on a door inviting pushing, when in fact the doors only open by pulling.)

This is a little confusing. As far as I understand th term, door that “invite pushing”, but open only by pulling, still afford pushing to everyone who didn’t try them, or didn’t see someone else try them, or weren’t told about them. So, as far as I understand, affordances are not about features of the objects themselves, but about how the objects are perceived and understood. Of course, since your knowledge and experience have a huge role in this, affordance is always relative to certain individual, or a group of individuals similar enough to generalize.

I think that the word “invite” would be indeed almost perfect, if not its positive meaning: razor affords cutting yourself (that’s why it’s usually held with such care, even if closed), rotating gears afford crushing your finger, crawling insects afford biting, and heights afford falling down. I’d hesitate to use the word “invite” in these cases, although the affordances are clear for most people.

I have to agree, that making the affordances match the actual properties of the objects is a very good idea, in both positive and (especially) negative cases.

On the flip side, can you, yourself, choose to make everything you hear completely unintelligable? Can you just flip a switch one morning, and suddenly everything people says to you becomes jibberish, until you flip the switch back the other way, and suddenly they are talking sense again?

Of course not. And yet – it’s almost true. There are several books that made no sense to me the first time I flipped through them. But then I learned a few things elsewhere, and then those books they made perfect sense. Wiki:YouCantLearnSomethingUntilYouAlreadyAlmostKnowIt.