What is it about wiki that makes it a successful technique for creating Web sites?

First and foremost, the energy and persistence of the community drives a wiki, whether it be dealing with content, organisation, or conflict.

If at this point you’re saying, “Yeah, but it’ll never work”, you should investigate WhyWikiDoesntNotWork. 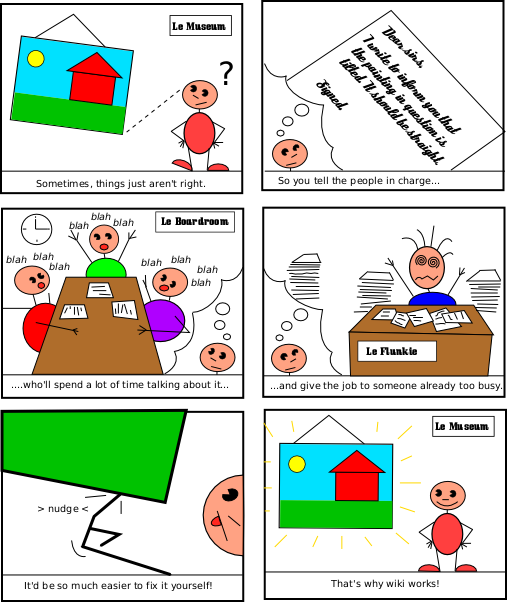 I guess I’m a little tired of WhyWikiWorks pages being about how SoftSecurity works. SoftSecurity is important, but it’s really more about WhyWikiDoesntNotWork. I tried instead to think of some positive principles that make the wiki process a success. I dunno – I guess the rearguard action of always talking about WhyWikiDoesntNotWork invites too much suspicion. I wanted to say, “Hey, these things are what make wiki so successful,” not “these are the things that keep wiki from failing miserably.”

I was thinking of an analogy: WhyCarsWork? would describe 4-stroke engines, pneumatic tires, transmissions, and drive shafts. WhyCarsDontFail? would describe bumpers, safety belts, and airbags. Similarly, WhyWikiWorks covers how this medium moves forward, and WhyWikiDoesntFail? describes how this medium keeps from crashing into walls (or, rather, from falling apart when it does).

I guess I’m looking for something like, “Why use cars? Because you can go anyplace that roads go to.”