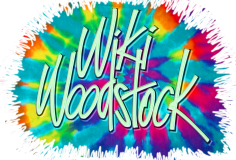 WikiWoodstock is a TimeWindow for InterCommunityCooperation in construction. It makes extensive use of a collaborative editor.

What is currently decided:

What is on the table:

MurrayAltheim made a logo for us, thx.

I wonder if makig this a cluster WikiWoodstock makes sense. Or is it better to move over to a wiki-woodstock(-wiki) rightaway. I fear so. Seems like this is goin to be the frontpage.

I think we should do everything on one single page, right now. That way, we can all keep track, easily, of what’s going on, and there’s no ambiguity about “where to look.”

That said, I think it’s right to have the Oddwiki for WikiWoodstock right now, to mold it into what we want it to be. I think we should do all coordination here on CommunityWiki, though, where we’ll see it.

Would anyone object to that?

I’d agree to to either solution. Having everything happen in another place is not convenient. I dropped by at the oddwiki place, but haven’t aggregated ir’s RSS feed (it’s a pain to have to look for how to) or added it to my daily reads …. keeping a bit of focus here wouldn’t be bad.

on RSS in cw:RecentChanges. Let’s say I’m completely lost to give any official URL to any people speaking french interested. Normal musicians and painters (non-wikistes) cannot understand. Imo, giving the URL and make people understand the ‘coop’ space remains very complicated. On my own, I feel completely lost on the official coop space : 1.DenotingAuthor does not work 2. I’ve not found the way to insert an image (just a french flag this mornig). So, as we did on the AutransWiki meeting, how about thinking having an official “home page” (non editable) linking to our coordination spaces. Pehraps a simple BlogControlledByWiki ?

Good. It felt lousy when I moved the contents from here to wiki-Woodstock (the wiki on the odd-wiki-hive). But I had to protect community-wiki from my upcoming working-rage and definitely needed a blank wiki to feel it right. I very much like that this page is getting back to life again after I had bloodsucked it so badly.

Work on wiki-Woodstock should spread out to other wikis and in a way this page is a first example for it. Setting up rss is still an obstacle, Emile, right. So making pages wiki-Woodstock on other wikis and in fora as well and keeping people up to date on them with the preparation of the event is probably pretty bold, but will most likely lead into [[mass-participation?]], and that’s what this is all about, innit?

Uiih, thanx for the logo, Murray! It’s two colored sprials folded into each other. I like it and put it on the wiki rightaway.

A stable homepage sounds tempting but is a mistake I think. The whole story would get more administator dependent, and that’s a mean long-term poison like arsenic for wiki-Woodstock. People can take part and influence that from the very top-level downwards. A stable page might make sense when we have 10.000s of hits and get bandwidth problems but for now it’s no good, I think.

You’re welcome - happy to help. It’s a PNG file with a transparent background, so it should go onto a coloured background without any problem. If that doesn’t work for any reason let me know. The tie dye is a photograph of one of my own hippie T shirts, so I can’t exactly take credit for that… Note that I’ve got a big size image of this in case you guys decide to make actual T shirts for the event. I can send it to Lion if you want.

Murray thanks. Your logo works also in langue-française : it makes me remember a very old game. Impossible to remember the name, it looked to be Spiroxxxx. Even if I can’t remember the name, let’say the result was a bit similar : just some color inks and a small rotating table. Thanks a lot Murray, I love it ’

There was the first netstock fest in march. They seem to know a lot about audio. netstockfest.net: wiki-Woodstock

BayleShanks & I talked at the last one; MattisManzel talked on the WikiTing about how it went, and what to do with it.

I believe we’ll be taking it to a once-in-3-months live meeting.

Actually I think it would be good to have both:

Regular meeting times w/o organization are good b/c they are easy and have little cost. But organized meetings which are few and far between are good because they can attract a much larger group of people. I’ll be writing more about these advantages Real Soon Now.

By the way, the organized conference should be planned very far in advance (6 mo at least, I’d say). And perhaps should even charge a nominal fee, to presenters if not to attendees (although that depends on if a good use can be found for the money; collecting the fees would add a lot of work).

Let it come out of the community. There are few people now who - after the few weeks since the idea came up - are interested in it. Cool. More opinions will come in when more people start to get involved. Gathering all these voices, listening to them and coming to an agreement is the way to go, sure, as usual. What I feel right now is that several months of distance between the wiki-Woodstocks (these big joyfuly multimedia tings) give us enough of preparation time. The nature-given rythmn (O+, female rythm) that it finally might come down to when enough people make enough steam to keep it uptime is the moon, innit? So moonthly kinda. But we are rather in the slow ballad-phase now, agree. A yearly event (O->, male rythmn) is something else even beyond and still to be dreamed about but vagely imagineable already. Let’s check about that more intensely when we have done some of the more moony sessions. Supporting parallel events, trying to create interfaces to them, enriching as well wiki-Woodstock as the parallel event seems to be a good idea to me, that’s why I came up with wikimania beginning of August. No concurrence please, it might easily turn in that direction, a bad direction. Looking ahead of one wiki-Woodstock, the next one and the one after that one seems to make sense to me too. Which event in autumn to go along with, which later? The 22C3 (22nd Chaos Computer conference) the end of December would be a good time, wouldn’t it? Finding a good balance in keeping wiki-Woodstock internal projects going, even traditions in case such might ever develop, as well as carefully looking how wiki-Woodstock could interact with local events to run along with and cleverly adapting the interface to it would be cool. Anyhow. The idea is astonishingly less ridiculous now than it was the evening it came up. Thx.

So, it seems like we are talking about two things then:

Perhaps we should say:

If you want to meet up with us, check the schedule, and pick what you want:

http://wikiwoodstock.projectpath.com/clients - no idea if of any use. Well, it was for free.

i have the moon-phases now in the rear left corner of my kubuntu-desktop. Maybe rather than the first saturday of the month make it the saturday closest to full moon. I like the moon, know?

Well, just found my way here thru the netstock festival forum. I am a bit involved in streaming activities with electronic music and think it would be cool with a WikiWoodstock arena to make music on. I’ve been involved in a 24hour music happening with collective I am a member of, Tapegerm Collective. Also been involved in some headphonefestivals (Placards) and some other happenings. I am a bit cnfused about what is happening… if the ideas is still there to do a WikiWoodstock but later… now? … or next summer…? I can leave some url’s and my email. Please contact me if you are still up to make something like this.