Including text from another wiki-page is interesting. On s23-wiki it gets done with <rss>url</rss>. Thats easy. But including whole pages leads to quite some overload. It would be useful if one could define which part of a page is being fed as rss by using rss-anchors. Likely for the document part, the top of a page. What we want others to read, the essence, the worthful condensed information. Not our chat down on the page.

In read mode you should see the rss-anchors. Maybe the text between the rss-anchors should be slightly different (color?). Best you should also (somehow) have the pages listed that have the anchor surounded part included. Like that you could easily controll how the effect of changing something is in the diffent context of the other wikipage.

rss-anchors would be more flexible than Mediawikis division into article and discussion page (which also helps a lot), I think. Is it technically imagineable?

These things are definitely technically imaginable.

Substituting stuff in one place in another place is called "TransClusion." Perhaps we want to call this, "WikiTransClusion."

It doesn't reall have anything to do with RSS.

There are two things that we need:

The first part is relatively easy. You could use WikiFormats to handle that- some standard marker that says, "Above is the DocumentMode, below is the ThreadMode.

The second part is hard: Making a WikiInterchangeFormat, and adapting wiki formats to use it.

Actually, making the format isn't hard, what's hard is convincing everybody to use it.

Fortunately, we don't have to: The WikiGateway that BayleShanks would be the place to put interchange logic, until everybody was convinced of the approach. 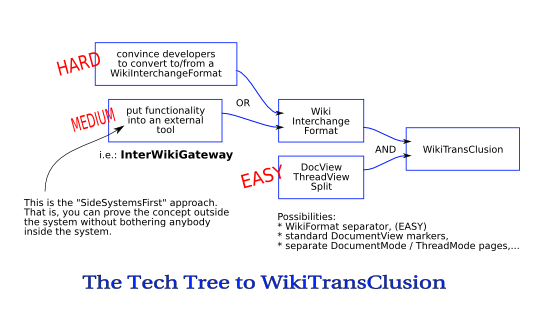 So, if you want to lobby for WikiTransClusion, I'd:

As for the WikiInterchangeFormat, be prepared for resistance. Wiki developers are dragging their feet in the sand about this one. But perhaps now is different: Perhaps the need is clearer.

I checked to make sure there was no PriorArt on the wiki before I made this page.

The closest things I found were:

Here's a demonstration of a cool low-tech solution: http://wiki.crao.net/index.php/ChristopheDucamp

I believe it's just a literal TransClusion that could work for any web page. What a neat feature!

The main problem I have with that kind of transclusion is that it's, well, ugly. I've never seen the use for it, a link works as well. Maybe if there was a feature to change the CSS for transcluded pages ? (i.e. "pages from communitywiki use this CSS so that the colours don't jarr). Maybe it'd look better than.

Hmm. I still prefer aggregation (bloglines !) to transclusion. Though neat, working transclusion would really be cool

I think part of the motivation here is that you can have local ThreadMode on a remote DocumentMode.

As for transcluding whole web pages: With respect to VisualLanguage, it's entirely different than linking to a target page.

Consider: We could remove all images from this wiki: Just include hyperlinks to the image targets.

The CSS point is interesting though. Some CssStandards? would be cool between WebApplications?.